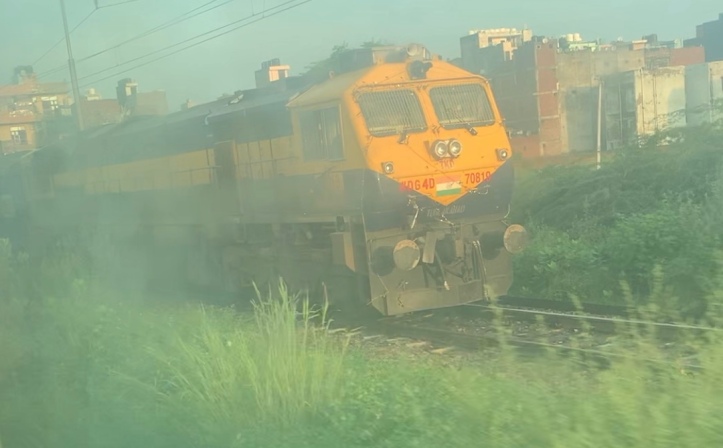 It has been two years and eight months since I wrote Soup Piyo Soup- part 1 and then followed distractions and procrastination. I was determined to jump start my blog and I knew an opportunity would present when I booked my flight tickets to India this year.

I had recently finished listening to an audio book titled ‘Railways and the Raj’ written by Christian Wolmar and narrated by Jonathan Keeble and this got me thinking that I could pack in what could become my second epic train journey! And what was the first you ask? Well, I was about 12 years old. It was summer (summers in Bangalore were bearable then!) and our vacations had begun and the Aresh clan had decided to head to Pathankot to meet with my uncle and his family.

To travel to Pathankot, we first had to travel to New Delhi and the journey from Bangalore to New Delhi by train took nearly two and a half days. I remember my brother and I fighting for the window seats or climbing up and down the ‘ladder’ to reach the top berths. You may think that the excitement would die down a few hours into the journey and that you would be bored stiff by the time the destination arrives, but it was not to be. Irrespective of you being a kid or an adult, there was always something on a train journey that piques your curiosity and tingles your senses. The excitement starts not on the train but few days before when you start packing. You end up with two kinds of luggages – the one meant for the train journey and the one for the destination. Mine always contained a stack of comic books, especially Tinkle.

There are three distinct memories that I hold from that train journey, the first is being forced to wipe yourself clean with a wet towel because there was no such thing as a shower area and still today there aren’t one in most trains or until you pay a premium price, the second, a dust a storm while passing through Rajasthan which rattled the trained and forced it to a stop and the passengers scampered to shut the windows and to clog any opening to prevent sand being blown in and the third was a introspective silence that prevailed in the coach when the train pulled into Bhopal as the memory of the toxic gas leak was still fresh in people’s mind.

Back to 2019, my journey in India consisted of travel between New Delhi and Bengaluru, and I was ever so tempted to book one of the many ’35 hours to reach destination’ trains plying between these points but given the recent spate of monsoon madness and my tight schedule I had to give up the idea for another day and another blog post. But, we did manage to squeeze in a six hour train journey between New Delhi and Kathgodam. I wanted to splurge a little so I got my wife and I the Executive Class A/C Chair Car tickets costing us a total of two thousand four hundred and eighty rupees. Soup Piyo Soup- part 1 was inspired by the same journey two years ago but in a A/C Chair Car. The stark difference was evident and will be laid bare in part 3.